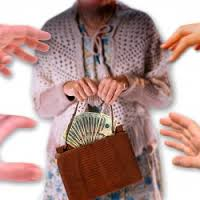 We often hear of the elderly being vulnerable to financial abuse. There is a perception this abuse is by strangers who befriend elderly people. But the reality is that it occurs mostly within the family and unfortunately family members do not have sufficient objectivity to see that this is happening. This was relevantly demonstrated in decision of GC [2013] QCAA 66K.

GC was an 84 year old man who lived in a single bedroom Department of Housing Unit. He received assistance from various government departments and his only source of income was the aged pension. He had two children a son and a daughter. He had a history of gifting money to his adult son and it was his benevolence to his adult son which caused a social worker and his daughter to be concerned as to GC’s ability to manage his limited financial resources and so an application was made to QCAT for an order that the Public Trustee manage GC’s affairs.

The adult children where estranged from one another. The son maintained a close relationship with his father. However, it was his conduct within his relationship with his father which was cause for concern. GC frequently provided gifts of money to his son which left the father in financial difficulty and this resulted in his adult daughter providing financial assistance to her father to ensure his wellbeing. The adult son appeared to lack insight into this issue. At one stage the adult son took up residence with his father causing his father to breach the Department of Housing regulations putting his father’s tenancy at risk.

GC suffered dementia and other illnesses. Disturbingly the adult son did not appear at the hearing or give evidence as to his views of his father’s generosity to him. His position however, was that his father had always gifted him money and so the ongoing gifts were in keeping with that. The Tribunal found that having regard to his deteriorating mental condition and “because of his lifetime of habit, GC is unable to resist or weigh the outcomes of providing financial assistance to his son or others as opposed to his own interests” at [56]. And so the Tribunal found that “financial abuse is occurring and that GC is vulnerable due to his lack of insight into the consequences of his financial decision as a direct outcome of his diagnosis of dementia” at [58]. And so they appointed the Public Trustee to manage his affairs. The Tribunal particularly pointed to an incident where the father drove to the airport to collect his adult son only to become lost at the airport for five hours driving in and out of the airport at least 12 times. GC was hospitalised after the incident. The Tribunal found the adult son’s “conduct towards his father indicates a lack of insight into the difficulties his father now has and what it means” [71]. And so they appointed the Public Trustee to manage the father’s affairs. The tribunal favoured this approach over appointing his adult daughter because of the inability of the adult children to work together.

This case demonstrates that financial abuse can happen even in the most meagre of circumstances. These decisions demonstrate the necessity to plan for our declining years and ensure that we have in place a strategy to ensure our wellbeing as we decline, regardless of how small our financial resources may be. Appointing an Enduring Power of Attorney is essential to this process. If you would like to know more on how to minimise the risk to you, or you are concerned about the financial welfare of a loved one please call us to discuss: 55769999