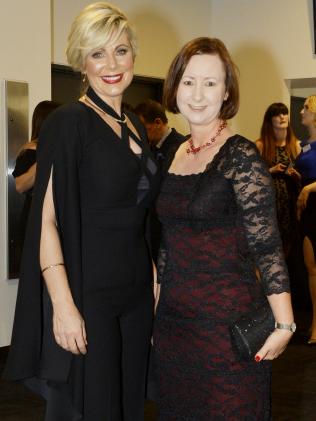 A SMOKE machine was probably the only thing missing at the Queensland Law Society Legal Profession and Awards Dinner on Saturday night.

A four-piece band, coloured overhead lights, BMW cars on display either side of the stage and celebrity speaker Tara Moss made for a lively evening – a step up from previous years apparently under the helm of new president Christine Smyth who admitted she likes a touch of glamour.

Attorney-General Yvette D’Ath broke away from scripted lines to deliver a passionate toast to the unsung heroes of the profession toiling away in the suburbs and regions away from the limelight.

She also lamented what in her view is the growing “negative discourse” surrounding politics and big legal issues of the day – in what became a recurring theme for the evening.

Mrs D’Ath spoke of the “dumbing down” of public conversation around complex issues despite unprecedented access to the facts and urged lawyers to “stand up and speak out when you think we are not getting the balance right”.

For the first time ever, QLS presented Honorary Life Member awards to recognised practitioners with more than 15 years’ dedicated service to the profession.

Another new category – Innovation in Law was taken out by brand new firm Helix Legal who have obviously done a good job of disrupting the traditional business model since launching about five months ago.

QLS’s top honour – the President’s Medal – went to Megan Mahon who continues to add to her growing list of achievements.

Fellow nominee Rod Hodgson of Maurice Blackburn was recognised with an outstanding achievement award as judges were so impressed with his application.

The evening also serves as an official welcome to the incoming president with Ms Smyth using her address to go into bat for her colleagues facing uncertain times.

“We are on the crest of a wave of technological and societal change which does not discriminate as to where and what law you practice,” she said.

“The challenge which faces us, is either to be swamped or to ride the wave.

“We stand at a time in history when the rule of law is subject to an unprecedented assault.

“I opened by noting that despotic regimes of the world always focus on neutralising lawyers to achieve their nefarious ends. Unfortunately, that sort of thing is seeping into our own society.

“In the United States, the land of the free, President Trump unashamedly seeks to influence the outcome of court proceedings in which he has an interest.

“Here, some are calling for judges to be hauled before citizens’ panels to justify their decisions, presumably to receive six of the best and to be sacked should the explanation prove unpersuasive in the eyes of a few.

“This way lies madness. It represents nothing less than an attack on the rule of law.”

If we had to pick a theme – it is that lawyers are gearing up for a big year both on the ground and in the news.