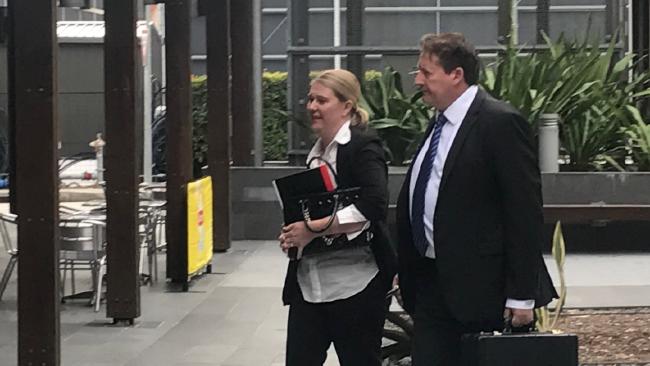 THE Fadden Forum fundraising arm at the centre of a Crime and Corruption Commission investigation into last year’s local council elections was “a tool for the re-election of a Liberal government” a hearing has been told.

When asked for her understanding of the Fadden Forum, she said it was a fundraising arm tasked with the re-election of a Liberal government.

Fadden MP Stuart Robert, who has admitted giving election funds to two former staffers for their own council election campaigns, is also due to give evidence to the hearing on Tuesday.

Ms Holzapfel was asked if there were “any commonalities” in the campaign platforms and views of the supposedly independent candidates she conducted work for.

Meanwhile, a former staffer Mr Robert who won a seat at last year’s Gold Coast City Council election, says she was ‘open and honest’ about her links to her former boss.

Kristyn Boulton ran as an independent candidate, but told the CCC hearing she told potential voters that she had worked for Mr Robert for almost nine years and had previously been a member of the LNP.

“I was always very honest,” she said.

When quizzed by counsel assisting the CCC Glen Rice, QC, about how she considered herself an ‘independent candidate’, Councillor Boulton said it was because she was.

“I wasn’t running on an endorsed ticket of any kind,” she said.

She told the hearing Mr Robert did not encourage her to run for council, but offered ‘sage advice’ when she told him she was considering running.

Earlier, the head of the Queensland Electoral Commission had “significant” concerns about last year’s local council elections, the CCC hearing was told.

“Some of these concerns were reasonably significant,” he said.

Allegations have been raised of deceitful conduct by candidates who failed to declare links to political parties or unregistered groups.

Counsel assisting the CCC, Glen Rice QC, said Queenslanders were entitled to have faith in the electoral process.

“Transparency and openness is paramount to the political process,” he said.

The hearings, which will also feature evidence from a number of candidates and councillors including Ipswich Mayor Paul Pisasale and Gold Coast Deputy Mayor Donna Gates, has been set down for five days.

ECQ boss Walter van der Merwe said there was no excuse for any candidates caught breaking the law.

Pointing to information in an official candidates guidebook, he said candidates were also advised to study the relevant legislation.

“If you follow my guidelines you can’t make a mistake,” he said.

“I will provide you with all the information to keep you honest and keep you transparent.

“I don’t know what else I can do to be honest.”

However, he said since the ECQ lacked the resources for designated investigators, a degree of “good faith” was placed in candidates to do the right thing.

The Crime and Corruption Commission has summoned 19 people to testify as part of an investigation into the conduct of candidates who contested the Gold Coast, Moreton Bay and Ipswich elections.

Gold Coast mayor Tom Tate, Moreton Bay mayor Allan Sutherland, Ipswich mayor Paul Pisasale and other councillors will also give evidence on one of the four other days scheduled between April 19 and 26.

The CCC launched Operation Belcarra in 2016 after the Electoral Commission of Queensland received complaints about improper financial dealings during the local council campaigns.

It included concerns over donations from Mr Robert’s Liberal National Party branch’s fundraising arm to former staffers who ran as independents. Candidates who run as independents are not allowed to work or fundraise together during an election campaign and risk heavy fines if they don’t declare their party or independence.

The CCC hearing, headed by chairperson Alan MacSporran QC, is aiming to uncover if candidates running in each of the three local government areas advertised or fundraised as an “undeclared group of candidates”.

It will also gather information about possible criminal offences as part of Operation Belcarra.