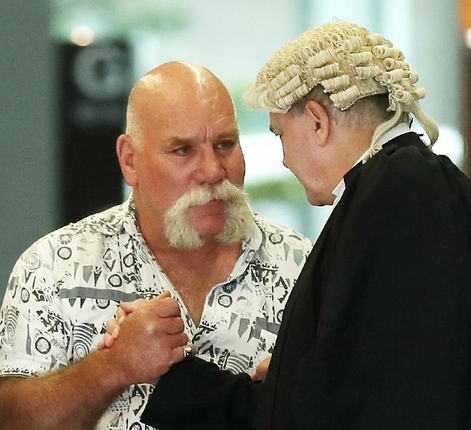 PETER Nixon loved his dad with all his heart, loved him so much he simply couldn’t bear to see him suffer.

Police alleged he loved his father to death.

But a Supreme Court jury yesterday acquitted the Brisbane builder of helping his frail and elderly dad John to kill himself with a cocktail of pain relief drugs and sedatives in soft drink.

After the verdict, Justice Ann Lyons told an emotional and relieved Nixon: “You are free to go”.

Nixon, 59, gave a series of backslapping bear hugs to his legal team and supporters, before going home to the loving arms of his family.

“It has been a long journey and I don’t think anybody’s journey would like to have to encompass what my family, myself have been through over the last 2.5 years and longer,’’ he said outside court.

Holding out the pinky finger of his left hand, bearing his 88-year-old father’s firefighter’s ring, he said: I would just like to show that to remember my father”.

In his acquittal, Nixon has become an unlikely poster boy for voluntary euthanasia.

His case comes five years after former teacher Merin Nielsen became the first Queensland person to be jailed for assisting in a suicide.

From the day he was interviewed by police, Nixon made his support for euthanasia clear, and he told police his dad John, a retired firefighter who was in a nursing home, was also pro-euthanasia.

During the four-day trial the jury heard John Nixon’s last words before slowly sipping the drink were: “You are probably going to get yourself in a lot of trouble son, shouldn’t even be doing that.”

But Nixon’s legal team told the jury that he never intended to kill his dad when he gave him a mixture of the pain relief drug oxycodone and sedative diazepam dissolved in soft drink on April 27, 2015.

Nixon’s barrister, former attorney-general Dean Wells told the jury that Nixon only intended for his dad to sleep after he drank the cocktail.

Mr Wells said Nixon used the potion in a bid to “trick his way into” getting his dad “admitted to hospital” where he could get treatment superior to that in his nursing home in Bray Park.

John suffered from arthritis, depression, moderate dementia, a prostate condition and was in a wheelchair.

After his dad was admitted to hospital, Nixon told police that he had nothing to hide and welcomed a police probe.

“Whatever society thinks they can do to me its been done mate. I’ve mourned this guy for five years right? My guts have been ripped out over this mate,” he told police.

“I don’t have to justify myself to anybody, I justified myself to my father. I helped him get his wish,” Nixon jnr told police.