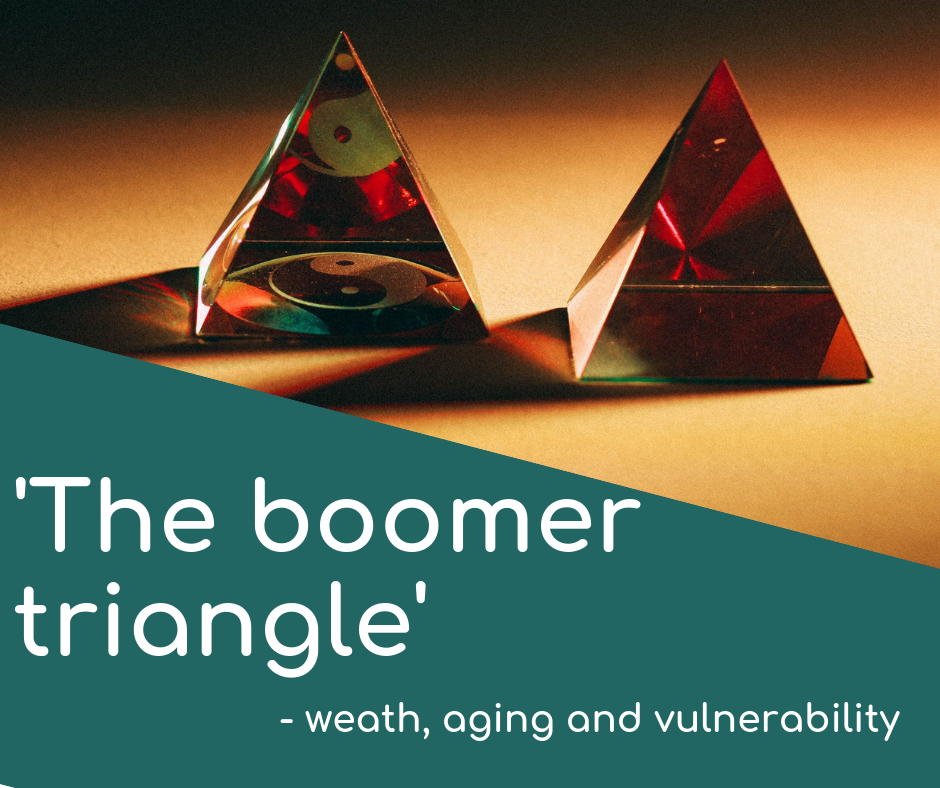 On 7 August 2018 the Australian population reached 25 million. We are 33 years ahead of schedule.’ One of the reasons for reaching this milestone sooner than predicted is the unexpected increase in longevity. We now have 4,000 centenarians, and 12 per cent of the population  falls within the baby boomer  demographic  and 16 per cent within the ‘builder’ demographic  of 65+. Collectively, 28 per cent of Australia’s population  controls 53 per cent of its wealth.2

Ageing doesn’t just entail physical decline, but an increase in cognitive decline. Around 425,416 Australians currently live with dementia and this number is expected to increase to 500,000 by 2025 and exceed 1   million by 2056.3  52 per cent of all residents in aged care facilities have some form of dementia.4  While not all ofus will lose capacity, we are all susceptible to frailty and vulnerability as we age. The combination of increased age, diminishing capacity and vast wealth threatens the independence and dignity of a significant proportion of our community.

It is an environment that effectively fosters elder abuse. Commentators speculate that the causes of such abuse involve ageism, ‘inheritance  impatience’, and lack of proper social and legal  infrastructure investment. Other causes include lack of awareness about rights and recourses, social isolation and the increase in fragmented families. Estimates put the annual cost of elder financial abuse at a minimum of $1.8 billion in Queensland alone.5

Tackling elder abuse is particularly difficult because the perpetrators are typically family members;” often the very family members that our elderly rely on for support.  While we collectively need to raise awareness, we must also provide a safe environment in which e
lderly people can seek advice and assistance. The objective must be to minimise the risk of alerting the perpetrators while preserving family relationships as much as possible.

It was in this context, during my presidency of the Queensland Law Society, that I advanced a combined initiative of QLS Policy Division, QLS Marketing and QLS Elder Law Committee, working in conjunction with Australian Medical Association Queensland and the Uniting Care Elder Abuse Prevention Unit to develop and implement an Elder Abuse Awareness Campaign. We focused on providing information and developed posters and wallet cards detailing various helplines available and placed them in general practitioner surgeries. The campaign sought to create a mechanism that would allow elderly people to express their concerns and seek guidance and education as to their options, in a confidential environment without fear of retribution from family members. General medical practices were a natural fit for this objective.

Indicators identified that the campaign was successful, with an increase in calls to the Uniting Care Elder Abuse Hotline.

This year I became aware of a further gap in the system requiring greater scrutiny:  the provision of services to elderly people in  their own homes.  While there are checks and balances in institutions catering for elderly people around  staff and their conduct, there is no equivalent in the private freelancing sector. Earlier this year,  in an effort to combat opportunistic predators preying on elderly people, I suggested that a similar system to the Queensland Blue Card for people who work with children should be extended to vulnerable people such as our elderly. The Blue Card system not only checks criminal history locally but also nationally, checks employment history and disciplinary history and is regularly monitored and updated.7

In this edition of Precedent we have the good fortune of learning from many well-respected and highly regarded practitioners  as to the numerous issues faced by elderly people and the myriad of remedies available.  I congratulate our profession for showing leadership on such an important social and legal issue, which is now being taken up by the federal government in the from of an aged care Royal Commission, recently announced.

Christine Smyth is the immediate past president of the Queensland Law Society, an Accredited  Specialist  (Succession  Law).