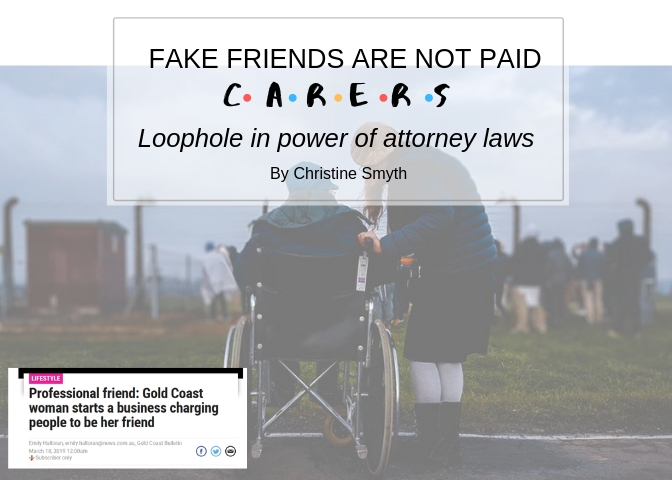 FAKE FRIENDS ARE NOT PAID CARERS: Loophole in power of attorney laws

Once upon a time, way off in a distant land, friendship was forged through shared experiences, trust, loyalty and a bond of genuine affection.  It was not something you paid for, unlike other services, that have a more salacious aspect, but I digress.  The ordinary Macquarie International English Dictionary[1] defines friend as: “…somebody emotionally close, somebody who trusts and is fond of another.”  There is no statutory definition of friend of which I am aware.[2]

Fast-forward to the new millennium, and friendship is now a popular paid service in certain cultures, for example Japan.  But, “not here” you say? Yes, it is now here.  With the rise of singledom, disconnected families and communities, and in particular an ageing and frail population, friendship has never been more important and increasingly difficult to obtain.  This recent news article reports on the arrival of a paid friendship service to the Gold Coast.   It is not a unique service as there are currently several services online providing access to paid friends throughout Australia.[3]  While such a service may be laudable in many ways, some may argue that the service has the capacity to exploit the vulnerabilities of clients.  None more so than in the elder abuse space and the coalescence of appointing an enduring power of attorney.  Current power of attorney law recognises the vulnerability of our elder population.   However, abuse is on the rise and our government through the passing of the Guardianship and Administration and Other Legislation Amendment Act 2019 (Qld) (“GOLA”) aims to increase protection from exploitation, as is stated through the policy objectives, the new laws are designed to “enhance safe guards for adult with impaired capacity in the guardianship system.”[4]

In line with this objective, certain people cannot be appointed as an enduring attorney, nor be a statutory health attorney. Relevantly here, one of those exceptions is anyone who is a “paid carer”[5] for the principal either before or after the commencement of the appointment.[6] Under the current legislation, there are no time limits to this exception. The new Act (yet to start) attempts to broaden this protection by including a time frame prohibiting a “paid carer” from being an attorney if they held the role “paid carer” within three years of being appointed, or subsequently become a “paid carer” after the appointment.

The objects of this amendment include: “ensur[ing] unsuitable people cannot act as attorney and reduce the risk of abuse or exploitation to an adult by a person appointed under an enduring document.”[7]

The definition of “paid carer” is, in effect, someone who performs services for the principal and gets paid for those services.  The question that therefore arises, is: what is the scope and extent of those services?  The definition of “paid carer” assists us by referring us to the Griffiths v Kerkemeyer[8] principle.  In short, it includes anyone who provides paid domestic or nursing services to the principal.  So that would obviously include cleaners, gardeners, drivers and nursing assistants.  But under this definition, both under the old and new legislation, it does not include being a “friend”.  As with the commercial world, creativity knows no bounds, nor does exploitation.  It is always difficult for our parliament to keep up with the fast-paced entrepreneurial environment. Legislation can only go so far.  One way concerned clients can address this gap, is to incorporate a well-crafted provision into their own power of attorney document as to the commencement and cessation of a power of attorney for any and all such service providers.

[2] Although there is a definition of friendly society in the Acts Interpretation Act (Qld).

paid carer, for a principal, means someone who—

(a) performs services for the principal’s care; and

(b) receives remuneration from any source for the services, other than—

(i) a carer payment or other benefit received from the Commonwealth or a State for providing home care for the principal; or

(ii) remuneration attributable to the principle that damages may be awarded by a court for voluntary services performed for the principal’s care.