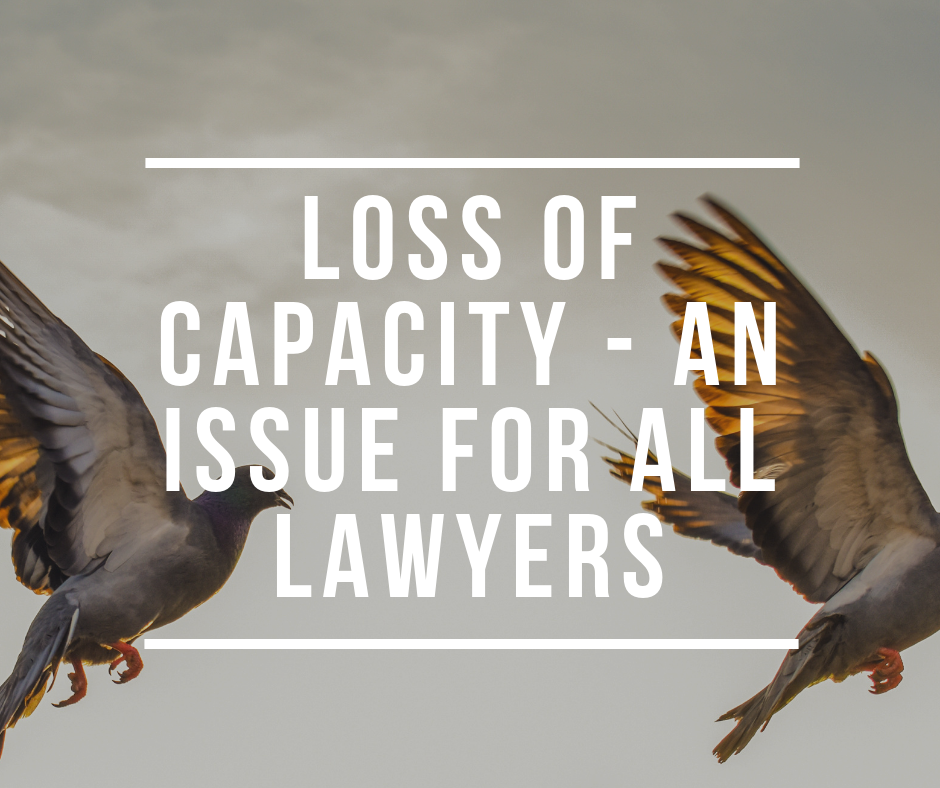 “The husband in this case is not the first nor will he be the last litigant who thinks he is smarter than those advising him. Nor will the husband be the first or last litigant to make foolish decisions. That in my view does not make him a person with a disability.”1

Many of us have irrational, demanding, clamorous clients, often when involved in complex legal matters. However, we also know that cognitive decline frequently involves this kind of conduct. So, at what point does the behavior of a client raise questions as to their capacity and invoke our duty to the court to bring  it to the court’s attention?

Wembley & Wooten (Wembley),2 a recent decision of the Family Court, examines the capacity of a client to conduct litigation and the duty of the acting solicitor to bring their concerns before the court. It draws on the decisions of Goddard Elliot (a Firm) v Fritsch [2012) VSC 87 (Goddard’) and Pistorino v Connell [2012) VSC 438 (Pistorino),3 distinguishing the facts of Pistorino, while affirming the applicable legal principles enunciated in both decisions.

All adults are presumed to have capacity, unless the contrary is established on the balance of probabilities.4 Rule 8 of the Australian Solicitors Conduct Rules 2012 requires a solicitor to follow a client’s lawful, proper and competent instructions.

Here we are concerned with “competent”. Capacity is to be determined according to the context.5 When certain factors are present. solicitors have a duty to ensure the client has the requisite legal capacity before either taking instructions or assisting them to make a legal decision which will affect their interests.6

In Wembley, the husband’s solicitor became increasingly concerned as to his client’s ability to properly give instructions. In August, 2017 (five months prior to the application) he wrote to the husband’s treating psychiatrist querying his client’s capacity. In September, 2017 the psychiatrist reported that their mutual client did “not presently present with prominent cognitive impairment”.

Notwithstanding, the solicitor maintained his concerns, bringing an application before the court. The solicitor’s evidence included the husband being affected by alcohol consumption, his heavy chain-smoking, reluctance to attend the solicitor’s office, believing his solicitor was wrong, the husband’s behaviour at the conciliation conference, and inappropriate email communications.7

Talk sense to a fool and he calls you foolish.”

Having regard to those factors and his duties to the court under the provisions of the Legal Profession Uniform Law Application Act 2014 (Vic.).3 and Goddard, the husband’s solicitor brought an application for a case guardian to be appointed on behalf of his client. 9 The husband did not oppose the application, counterintuitively, he “indicated to the Court that he proposes to continue instructing the applicant in this case”, 10 regardless of the outcome.

In Goddard. Bell J articulated the solicitor’s duty as follows:

“ …the primary responsibility of a lawyer is to be satisfied the client has the mental capacity to instruct. Doubts about this issue in the mind of the lawyer can also have important consequences for the conduct of legal proceedings. If the issue cannot be resolved to the reasonable satisfaction of the lawyer, as occurred in the present case, the lawyer must raise the issue with the court. It is the court which has the final responsibility to determine the issue.11

Upon the application being made, the court ordered that the husband attend further medical examination. The medical evidence was that the husband could “adequately conduct and give adequate instructions for the conduct of the case”14 with the caveat that the doctor was not privy to the privileged sealed evidence of the husband’s solicitor.15

Ultimately, the court found that the husband had the requisite capacity.

One in five people between the ages of 16 and 85 suffer a mental illness in any year, 17  which, while not impacting their overall capacity, may impact their capacity to engage in legal matters. Practitioners may now, more than ever before, need to be live to their duties in this context. It is an onerous duty and one that may call for the practitioner contemplating such applications within the client retainer.

Christine Smyth is immediate Past President of Queensland Law Society, and a QLS accredited specialist (succession law). She is a member of the QLS Council Executive, QLS Council, QLS Specialist Accreditation Board, the Proctor Editorial Committee, STEP, and an associate member of the Tax Institute.

for a previous article by this writer on these cases.

the death of the eldeny person. the question o1 her

capacity to make the gifts �d to c,eate the trust was

in the Aus1ralian Solicitor Conduct Rules.