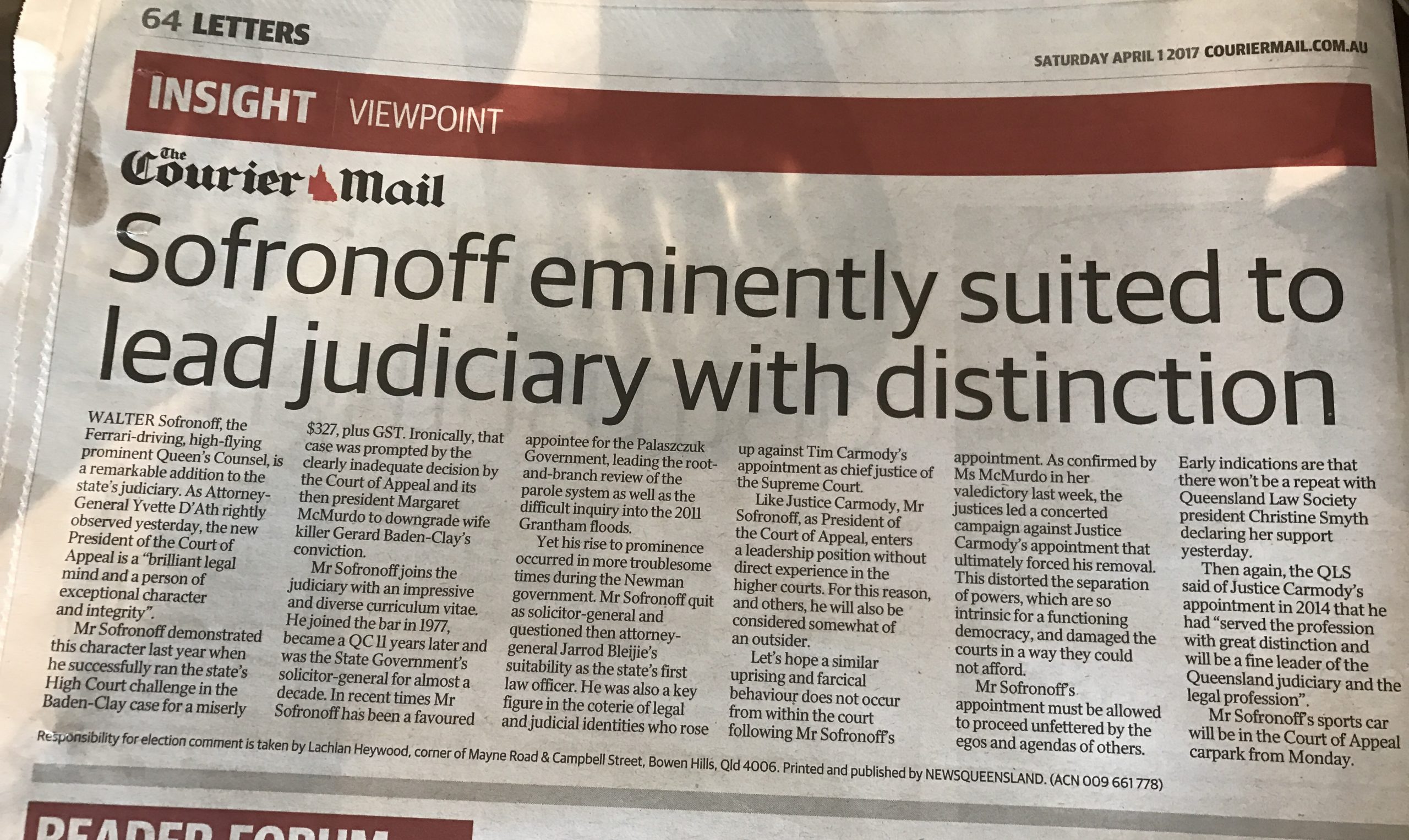 WALTER Sofronoff, the Ferrari-driving, high-flying prominent Queen’s Counsel, is a remarkable addition to the state’s judiciary. As Attorney-General Yvette D’Ath rightly observed yesterday, the new President of the Court of Appeal is a “brilliant legal mind and a person of exceptional character -and integrity”.

Mr Sofronoff demonstrated this character last year when he successfully ran the state’s High Court challenge in the Baden-Clay case for a miserly $327, plus GST. Ironically, that case was prompted by the clearly inadequate decision by the Court of Appeal and its then president Margaret McMurdo to downgrade wife killer Gerard Baden-Clay’s conviction.

Mr Sofronoff joins the judiciary with an impressive and diverse curriculum vitae.

Mr Sofronoff joins the judiciary with an impressive and diverse curriculum vitae. He joined the bar in 1977, became a QC 11 years later and was the State Government’s solicitor-general for almost a decade. In recent times Mr Sofronoff has been a favoured appointee for the Palaszczuk Government, leading the root-and-branch review of the parole system as well as the difficult inquiry into the 2011 Grantham floods.

Yet his rise to prominence occurred in more troublesome times during the Newman government. Mr Sofronoff quit as solicitor-general and questioned then attorney-general Jarrod Bleijie’s suitability as the state’s first law officer. He was also a key figure in the coterie of legal and judicial identities who rose up against Tim Carmody’s appointment as chief justice of the Supreme Court.

Like Justice Carmody, Mr Sofronoff, as President of the Court of Appeal, enters a leadership position without direct experience in the higher courts. For this reason, and others, he will also be considered somewhat of an outsider.

Let’s hope a similar uprising and farcical behaviour does not occur from within the court following Mr Sofronoff’s appointment. As confirmed by Ms McMurdo in her valedictory last week, the justices led a concerted campaign against Justice Carmody’s appointment that ultimately forced his removal. This distorted the separation of powers, which are so intrinsic for a functioning democracy, and damaged the courts in a way they could ¬¬¬not afford.

Mr Sofronoff’s appointment must be allowed to proceed unfettered by the egos and agendas of others. Early indications are that there won’t be a repeat with Queensland Law Society president Christine Smyth declaring her support yesterday.

Then again, the QLS said of Justice Carmody’s appointment in 2014 that he had “served the profession with great distinction and will be a fine leader of the Queensland judiciary and the legal profession”.

Mr Sofronoff’s sports car will be in the Court of Appeal carpark from Monday.