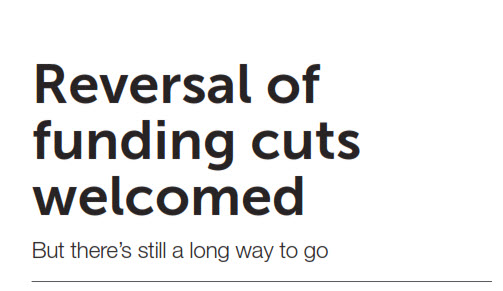 But there’s still a long way to go

On Monday 24 April, federal Attorney-General Senator George Brandis QC announced that the Government would reverse its proposed funding cuts for community legal centres. While we warmly welcome this reversal, as a victory it is bittersweet. The threat of reduced funding had already forced CLCs to review their offerings, staffing and volunteer placements. This is not easily reversed, especially when the State Government has already announced its funding allocations for CLCs. The restored funding comes with caveats and many CLCs will not benefit from this restoration, as it is to be allocatedto CLCs which provide much needed services in family law, domestic violence and Aboriginal and Torres Strait Islander legal services. Senator Brandis’s announcement said that the $39 million allocation for community legal centres would prioritise frontline family law and family violence services. Another $16.7 million would be for Aboriginal and Torres Strait Islander legal services. While it is essential that these segments receive this funding, it remains very concerning that CLCs which provide generalist legal advice remain severely under threat. The CLCs are the gatekeepers of the revolving door of justice, providing advice on a broad range of matters to the vulnerable and disadvantaged in our community. These areas include housing, employment, minor civil breaches such as fines and, importantly, assisting people in their interaction with government agencies, whose power and resources greatly outweigh most in the community.

Closer to my practice area, there are concerns on whether funding for family law and domestic violence matters includes elder abuse in all its forms. In 2015, the report of the Special Taskforce on Domestic and Family Violence in Queensland, ‘Not Now, Not Ever: Putting an end to domestic and family violence in Queensland’, identified elder abuse as a subset of domestic violence, but the funding does not appear to capture this. With more than six million people in Australia over the age of 55, it is crucial that we as a society ensure that legal services are available to this cohort. Rebecca Gee is a QLS member who also provides her services pro bono in her own time. “Each time I attend my local CLC to provide advice, there is an incredible number of clients,” she says. “All the volunteers try their very best to assist as many clients as we can, however, without these CLCs those clients would not have the opportunity to obtain the advice they need.

“This then renders them without the ability to make an informed decision on the next stage of their legal matters and can flow on through the court system, causing many other issues for them.”

“Oftentimes our clients have to rely on lifts from others to get to the CLC, or even organise for their child/children to be taken care of so that they can attend. It is a real disappointment for them if they are turned away as they genuinely require advice on very stressful situations such as child protection or domestic violence. Turning them away really should not be an option.”

She’s right; it should not be an option. Only realistic funding levels will overcome the access to justice gap that sees an estimated 160,000 people turned away from CLCs each year. The Productivity Commission, in its Access to Justice Arrangements report of 2014, estimated that additional funding of around $200 million a year was needed to maintain existing frontline services with a demonstrated benefit to the community. The reinstatement of a mere $55 million falls well short of this target. And so our advocacy for access to justice will continue.

There are some causes to celebrate. This month we have National Reconciliation Week from 27 May to 3 June, a celebration of the rich culture and history of the first Australians. It is also an opportunity to reflect on achievements so far and the things which must still be done to achieve reconciliation. At QLS, we will soon announce the official launch of our Reconciliation Action Plan (RAP). We will also host an appropriate staff event on Mabo Day (2 June). I would also like to note the State Government’s appointment of barrister Gregory Lynham to the District Court in Townsville and that of three magistrates, with Andrew Sinclair and Mark Howden appointed to the bench of Southport Magistrates Court, and Toowoomba-based barrister Robbie Davies appointed to the bench of the Dalby Magistrates Court. I congratulate our new appointees and call on the State Government to continue to support our justice services with further judicial appointments aimed at overcoming the bottlenecks in our courts.